Getting Ready for Baby Chicks

I decided to add chickens to our garden, which is in a busy urban yard, late in the spring. In order to get the best variety, I opted to order my chicks online. What’s that? You didn’t know you can just mail orders chicks? Well, you can. In fact, it’s one of the most common ways people purchase chickens, ducks and other barnyard fowl. I ordered from Cackle Hatchery after checking out several recommended hatcheries.  I chose three breeds from Cackle’s hatching schedule. All three – a Rhode Island Red, a Barred Rock and a Gold-Laced Black Wyandotte – are known for being friendly and good egg producers

It was exciting and terrifying to mail order chicks. I was worried about caring for newborn, tiny creatures and I was totally terrified of them travelling through the mail to get here. What if they got lost in transit or the box got damaged? Would they get too hot or dehydrated? Would the post office handle them carefully?

It was so much to think about, but I chose to focus on the fact that Cackle Hatchery ships hundreds of chicks each week and surely knows what they are doing.

I had a couple of months to plan for my chicks to arrive. That gave me and my husband time to pick the coop location and plan the build, as well as slowly purchase the supplies and materials.

Chicks must live in a brooder for their first six weeks or so. A brooder is just a secure, warm box or bin. It can quite literally be  large cardboard box. In their first weeks, chicks must be very warm at all times and they must have constant access to food and water. For most people, this means their chicks live indoors at first. The warmest room in our house is an upstairs spare bedroom, so that’s where I put the brooder.  I chose to use this chicken heat mat in the brooder, rather than a heat bulb. Heat lamps are efficient but there’s always the danger they’ll catch fire or burn the babies and I wasn’t comfortable with the risk. We have three cats, so I selected a plastic tote with a latched lid as a brooder.  To ensure good airflow, I drilled 1/2″ holes all over the bin, including the lid.

The brooder needed bedding, so I bought a BIG bundle of pine shavings. Finally, I ordered a chick feeder and waterer, and special chick food, starter crumbles. Starter crumbles are a high protein food specially made for baby chickens. It is the recommended food source for the first 18 weeks, though they can have very small amounts of other foods in due course.

I linked the specific products I bought because I had a really hard time deciding what to buy. It took a fair amount of time and research, including reading product reviews, to make a decision. So far, both I and the chicks have been very happy with all of it. 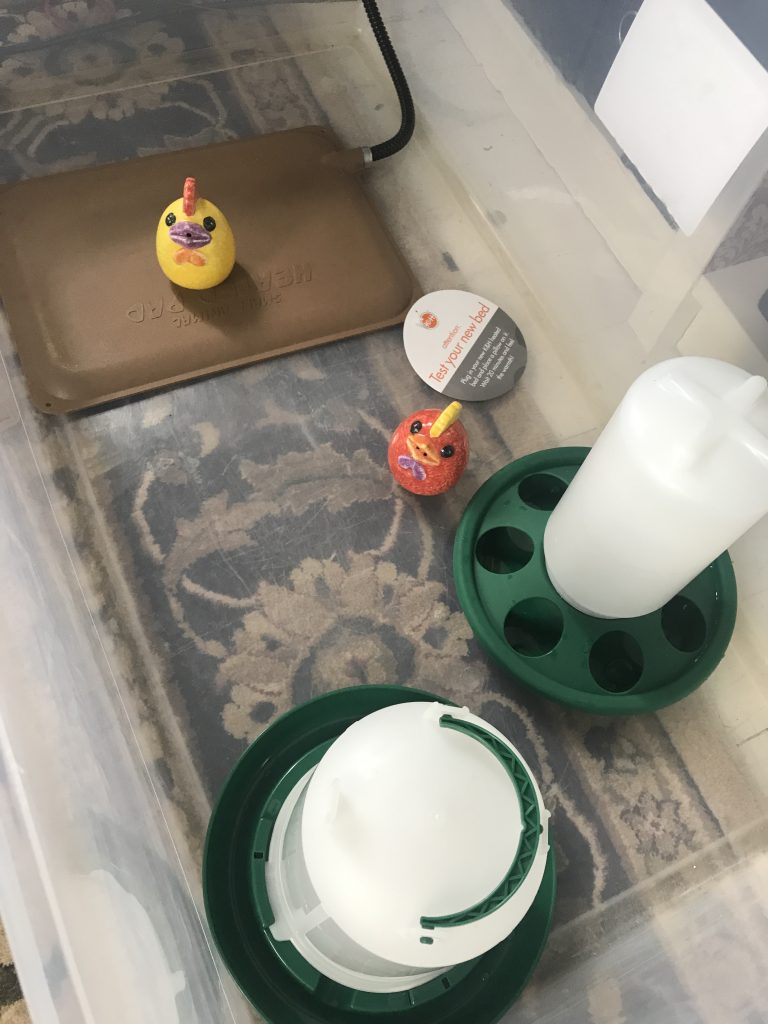 The waiting is the hardest part.

Cackle Hatchery ships chicks the same day they hatch and provides a tracking number right away.

How do baby chicks survive being mailed?

I wondered that too, it seems so improbable! It turns out that a clutch of eggs doesn’t hatch all at once. That means a broody hen has to sit on her eggs for several days to keep them warm, even as some are hatching. So newborn chicks have evolved not to need food or water immediately, since mama has to sit still and wait for the rest of the brood to come out. That means there is a 1-3 day window when new chicks can be packed and shipped across the country without too much trauma. The hatcheries do include a sort of sponge soaked in fluid for the babies, which they can peck at during their journey.

Live animals are picked up at the local post office, rather than being delivered. This helps ensure the animals survive the trip and are in good health on arrival. I was, frankly, most worried about that part of the process. Our local post office has been understaffed even before Covid-19 and I was worried my chicks would get overlooked or mishandled. I watched the tracking number constantly for 20 hours until my phone finally rang. It was the neighborhood post office calling to say my chicks were ready to pick up! I raced over and was SO pleased to hear incessant peeping from the box the clerk handed me – they were alive!

I brought them home, opened it and found….FIVE chicks. Of all the possibilities I had prepared for, including none of the chicks surviving the trip, I had never considered extra birds. All five were active and healthy, which was the important thing. Following guidance, I picked each baby up, dipped it’s tiny beak into the water dish, and then set it down. Each of them began to drink almost immediately and started snacking on their crumbles without prompting.

For the first hour, I watched them constantly. I wanted to make sure they were warm enough, but not too warm. Temperature issues are the number one health issue with newborn chicks. I was looking to see if they either huddled and cried (too cold!) or if they laid around the edge of the brooder panting (too hot!). They did neither. Instead, they walked and pecked and peeped and eventually took a nap.

The babies in their shipping box, just before they went into the brooder.

At the end of Week 0, the chicks were safely arrived and seemed to be in good health.