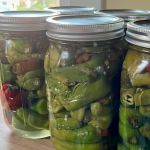 Disclosure: I’m an affiliate for Lehman’s Hardware, Azure Standard, Bookshop, Amazon.com, Le Creuset,  other companies. Clicking on links in my articles and purchasing products may result in the seller offering me compensation. I only share products I believe in and I only provide links when I believe doing so will benefit my readers.

Affiliate relationships help me cover the cost of producing content for Hey Big Splendor. If you use any of my affiliate links or codes, thank you very much.

How to pickle pepperoncini peppers

Friends, if you know me or you’ve been reading this site for long, you KNOW I am passionate about pickles and pickling. And canning. So you could reasonably assume I’m about to tell you how to pickle pepperoncini peppers and can them.

Unfortunately, the heat from canning tends to turn thin peppers to mush. After a tragically mushy batch of pickled pepperoncinis, I skip canning completely.

Then how do you pickle pepperoncinis!!?

Remember that pickling and canning are completely separate processes! One uses salt and acid to change the flavor and texture of a vegetable. The other sterilizes and seals the pickled foods in a jar for shelf-stable storage.  You can pickle without canning and, well, can without pickling.

To pickle pepperoncinis and have them stay crunchy and crisp, you only need a few things. 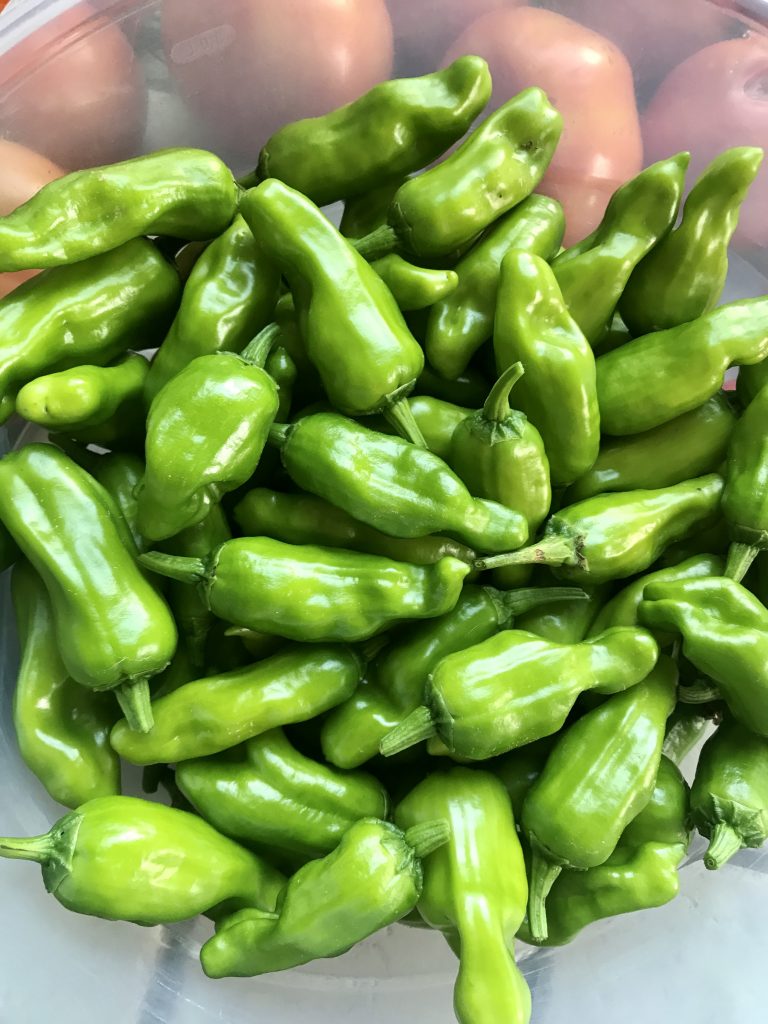 The process of pickling pepperoncinis

You’ll simply be making a brine and pouring it over whole peppers packed into jars. Easy as can be.

Combine the ingredients and bring to a boil. Reduce to simmer while you process the peppers.

Start by washing the peppers. The easiest way to do this is by soaking them in water in a very clean sink. They should be free from dirt or other debris before packing.

I HATE biting into a pickled pepperoncini and having brine squirt everywhere. To avoid this, I snip a tiny hole in each pepper. This has an added benefit – it helps remove air from the peppers during packing. That means more peppers fit in each jar and it’s easier to keep them submerged in the brine.

I also cut the stem off even with the end of the pepper. I have nothing against the stems but they take up room in the jar and make it harder to pack the peppers.

Once the peppers are washed, snipped and stemmed, it’s time to pickle.

Make sure your canning jars are freshly washed and warm. Because I’m not going to water bath can my peppers, I sterilize the canning jars and lids in boiling water. The easiest way to do this is to bring a large pot of water to a boil, then submerge the jars and lids for at least 10 minutes. Then turn the heat off. The jars can then hang out in the water so they stay warm as you fill them.

Carefully remove a jar from the water and use a magnetic lid lifter to grab a lid. This two piece kit includes the magnetic jar lifter and a nice pair of canning tongs, it’s a great, inexpensive option that will make things easier and safe.

Put the jar on a clean towel or wooden cutting board – it needs to be on a clean, sturdy surface that isn’t cold. That ensures the jar won’t shatter due to temperature change and that it will stay in place while you pack it.

If you wish, add a clove of garlic to the jar. Then pack the jar as full of peppers as possible. It’s ok to push them gently, they have a lot of air in them. Don’t push so hard you mash the peppers.

When you think the jar is full, carefully pour simmering brine into the jar until the peppers are covered, leaving at least 1/2″ of head space at the top. Wait a few minutes. You’ll see a lot of air bubbles coming out of the peppers and racing for the surface. Once the bubbles slow, gently press down the peppers to release a little more air. It’s likely there will now be more space in the jar. If so, pack in more peppers, then move onto the next jar.

Once all the jars have been packed with peppers and brine, take a look. The heat will have started to blanch the peppers, so they’ll likely be lighter in color now. There’s probably going to be more room in the jars, too. Assuming you still have peppers left, go ahead and pack some more in.

The jars should be quite full of peppers and the peppers should be covered in brine. It’s not the end of the world if you have some space left in the jar, as long as the peppers stay under the brine.

Because these will be stored in the fridge, I try to pack each jar as full as possible so my pepperoncinis take up less space.

Once you’ve filled your jars completely, place the lids on the jar and close the jar with a metal band. Tighten the band and wipe the lid, band and jar with a clean, damp cloth.

Let the filled jars sit on the counter for a few hours. The heat from the brine will soften the peppers slightly and help the pickling process but they’ll stay crispy and crunchy. The idea texture of a pickled pepperoncini is a little softer than raw but still firm and crisp. If you prefer a firmer pepper, put them in fridge as soon as the jars cool enough to handle.

Like all pickles, it will take them a few weeks to develop the proper flavor.

How long will pickled pepperoncinis keep?

Because this isn’t a canning recipe, the peppers aren’t shelf-stable. They need to be stored in the fridge, where they will keep for up to a year. To preserve the peppers as long as possible, keep the lid clean at all times and use a clean utensil to remove peppers from the jar.

Discard any pickled food that has mold on the surface of the food, jar or lid. 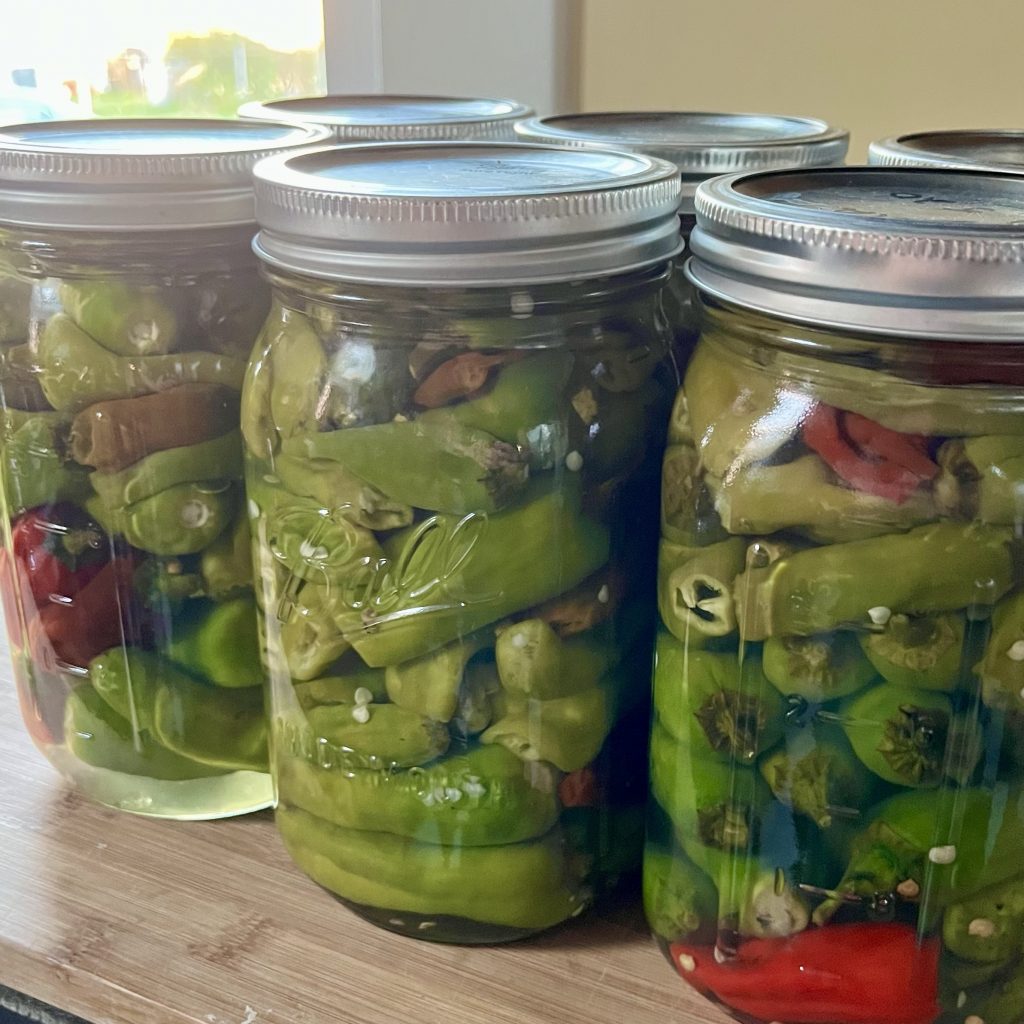 Really truly it does. Bring the brine to a boil but make sure it’s down to a simmer before you add it to the jars. You want it hot enough to blanch the peppers but not so hot it boils them. I have two jars left from last August (it’s June now) and the peppers are still the perfect texture. It works on other peppers, too.

Here’s a few more things you should know.

Can you reuse mason jar lids?

If you’ve read any of the my other canning posts, you know my answer to this is always ‘no, at least not for canning’. But you can definitely reuse canning jar lids for refrigerator pickling, since the jars don’t need to form a vacuum seal. In fact, this is a prime opportunity to reuse canning lids, just make sure they’re clean and sterile.

Should you leave the bands on canning jars?

For actual canned items, you need to remove the metal band once the jar has cooled completely (12-24 hours). But since we’re not processing these refrigerator pickles in a canner, the lid won’t vacuum seal onto the canning jar. For that reason, you’ll need to leave the metal band on the jar in order to keep the jar closed. If you’re like me, you have WAY more bands than you need, so this can be a welcome repository for some of them.

You can also buy screw on plastic lids that fit mason jars and use those to keep your jars covered. I like using what I already have, so I just stick with a canning lid and metal band.

How do I keep the peppers under the brine in the jar?

This can be a little tricky. If they start floating, especially once the jar is open and you’re eating them, the easiest thing to do is use a fermenting weight. These discs sit on top of the brine and keep things under the surface. You can also use a clean, smaller empty jar or a plastic baggie filled with water. Those will work great but they’re annoying to deal with if you don’t plan to consume the entire jar at once. They also run the risk of contaminating the jar as you move them in and out to get peppers.

You know I am ALL ABOUT reusing or repurposing but this is one of those times when buying and using a fermenting weight really is the better solution.

Another option is to move the remaining peppers and brine to a smaller jar or container. Just make sure it’s clean first.

Not really. Of course ‘hotness’ is subjective. If you don’t like any spice, then pepperoncini peppers may seem hot to you, which is totally valid. I like and tolerate some heat in my peppers and I would (subjectively) say they’re hotter than a sweet bell pepper but significantly milder than jalapenos. I would not use them in a recipe that called for ‘hot peppers’.

Are pepperoncini peppers the same as banana peppers?

Nope! They’re completely different peppers. Both are fairly mild but banana peppers are the less spicy of the two and they’re a little sweeter. You can use this same refrigerator pickling process to make pickled banana peppers, though. In fact, it will work for just about any pepper you wish to pickle. 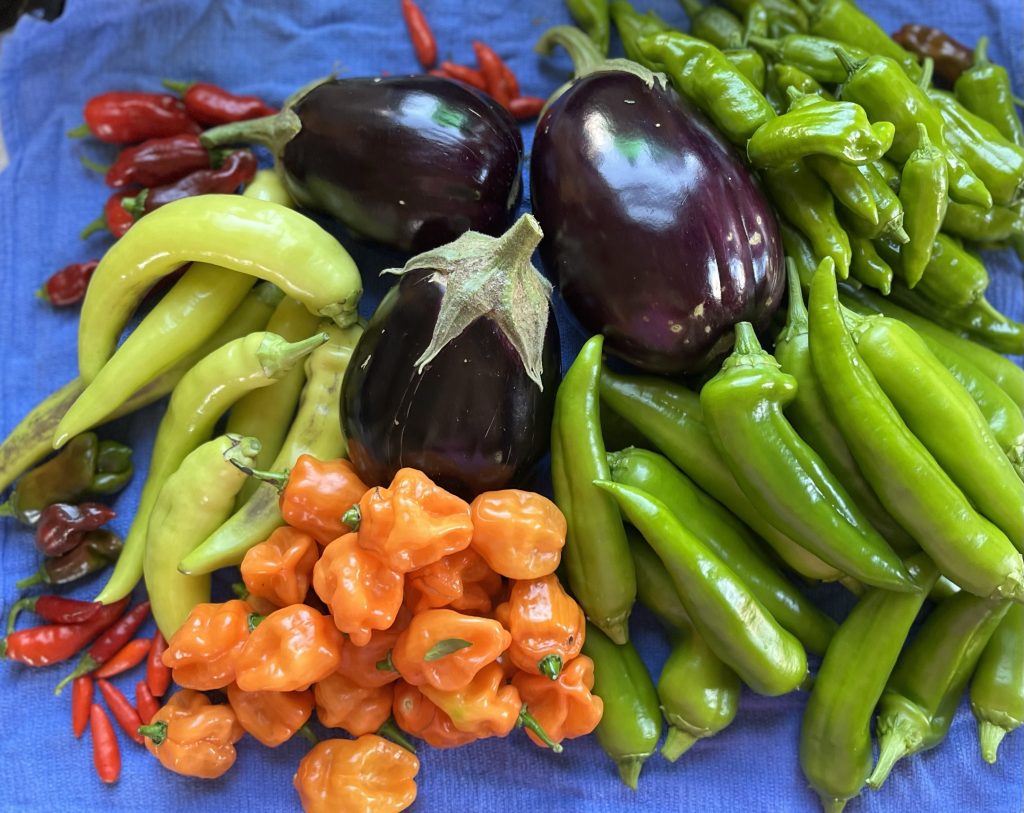 These are some of my garden peppers (and eggplants). On right, you can see the slender, yellow banana peppers. On the far left, you can see green pepperoncinis. Banana peppers are fairly long and smooth while pepperoncinis wrinkle up a bit. In between are red cayennes, orange habaneros and green Anaheim peppers.

It’s easy to pickle pepperoncinis and keep them from getting mushy. If you try it, I want to hear from you in the comments.

And by the way – a few of these homegrown pickled pepperoncinis are a fantastic garnish for a classic Bloody Mary or a Bloody Mary made with fresh tomatoes.