Is Canning Green Beans Worth It? 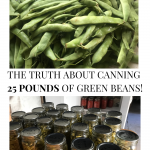 Does it make sense to can your own green beans?

Canning is a great way to preserve food, no doubt about it. But it takes time and special equipment, plus you need a large amount of produce. It makes sense to wonder if canning green beans is worth the upfront investment and hours in the hot kitchen.

Here’s my breakdown of canning 24 pounds of green beans in 2 days, including my costs, my time and whether I’d do it again. 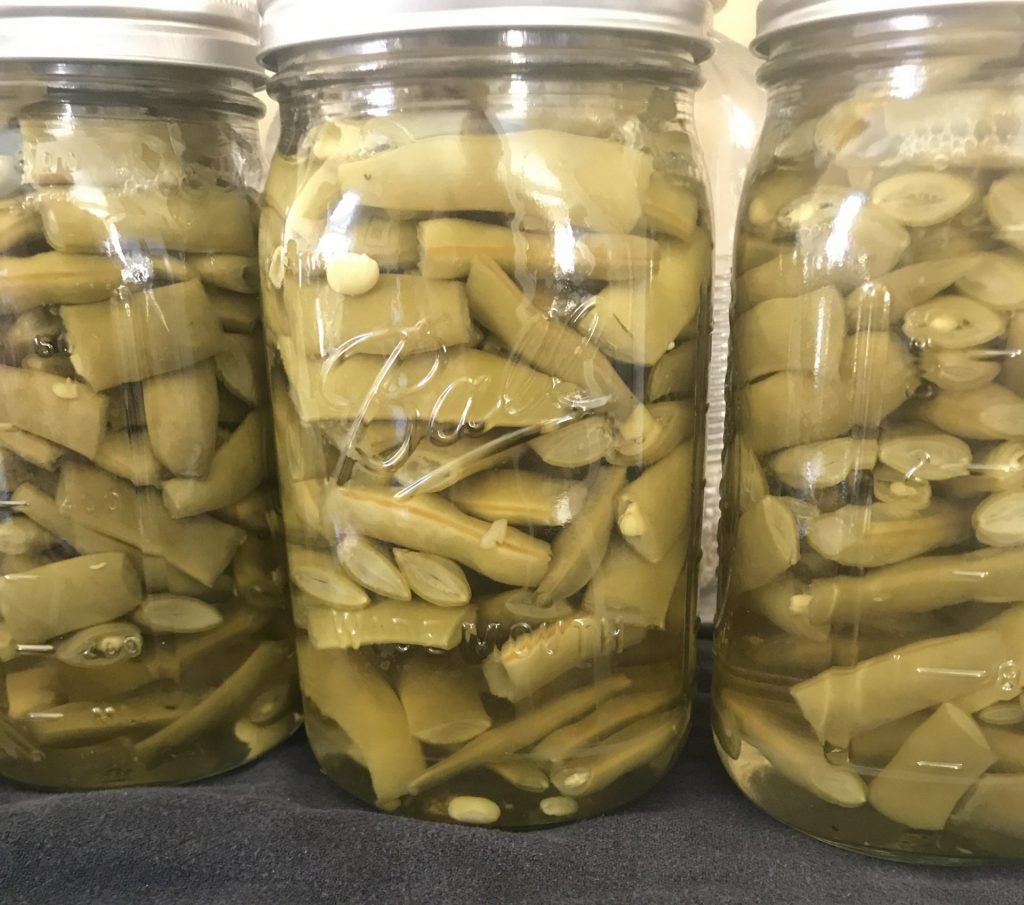 Does canning green beans save money?

This was my biggest question. Canning jars cost money and buying a large quantity of fresh produce costs money up front.

For me, it came down to this: would the canned beans be cost effective when compared with buying them off-season at the store?

Green beans were in season, so I was able to buy them in bulk at a local farm for $1.60 per pound. At the store, “fresh” green beans are generally at least $2 per pound and usually closer to $3 or 3.50, depending on the time of year. Pound for pound, there’s no question that it’s cheaper to buy beans in season.

Remember when I said that the general estimate is 2 pounds of raw beans per quart? Well, it turns out the Romano beans are bigger and denser, so each quart jar held less than a pound packed. Even the regular beans came in at less than 2 pounds per quart. Keep in mind that some weight was in the stems and ends I trimmed off. But even so, I planned for 24 pounds of raw beans to yield 12 quarts of beans. Instead, I ended up with 25 quarts. Both varieties of beans, even tightly packed, yielded more quarts than expected.

Based on our previous bean consumption, I expect we’ll need use one quart per week. After eating some of these beans and seeing how filling they are, each quart will likely supply us with beans for two meals per week.

My original calculations assumed each quart of canned beans would cost about $3. Because I ended up with double the quarts, each quart cost $1.60. That’s definitely cheaper than buying a bag of raw beans at the grocery store. Remember, we were buying a $4-6 bag of beans each week (2 pounds per bag) and we would usually have those beans for two meals over the week. Even if each quart cost the original $3, that’s a savings of $1-$3 per week.

But what about the cost of the jars? I’ll be honest. I’m not factoring the cost of my jars into this because I’ll use them every year. Much like my pressure canner, the jars are a fixed cost and I look on them as a one time expense that will be amortized over the coming years. That doesn’t mean purchasing canning jars isn’t a financial consideration, of course. The great news about jars is they have lots of uses beyond canning, so if you try canning once and decide you don’t want to do it again, you can repurpose those jars.

Each time I can, I’ll have to buy new lids, though. So add about $.35 to the cost per jar. That brings the cost for a quart of beans to $1.90, give or take price changes in lids. That’s still notably less.

To learn more about the absolute must-have canning tools, see Essential Canning Supplies. I’ve included links to the items I use, so you can get an idea of the cost to purchase these necessary canning tools.

How long does it take to can green beans?

It’s definitely cheaper, from a raw material standpoint, to buy a large quantity of fresh beans in season than to buy them all year long at the store. But it takes time to clean, process and can the beans. Is it still worth it, once time is factored in?

I was curious about that, so I kept track of my time.

I spaced my green bean canning out over two days. From opening the bags to taking the final batch of jars out of the canner, I logged about 10 hours. That’s a LOT of hours! But it’s really important to note I was doing a lot of other things during those hours. While the actual process of breaking the beans down is time consuming, a lot of that 10 hours included waiting for water to boil (over and over), waiting for the canner to go up to pressure and then come back down. In other words, time I spent doing other tasks while keeping a loose eye on the canner.

So IS IT worth canning green beans?

Looking at the costs, both fixed and variable, and knowing that I could actually have cut my time investment down to 8 hours, it does seem worth it to me. As noted, I’d still have had to spend some time processing the beans and I’d far rather do it all at once and have it over with for the entire winter! Now, all I need to do is open a can, bring it to a boil and then it’s ready for dinner. In combination with the cost savings, it definitely feels worth it to me.

What about the flavor? Do canned green beans taste good?

To me, the quantitative factors, time and cost, both seem to pay off. But what about another, very subjective issue, flavor? After all, there’s no point in canning food you won’t actually enjoy eating.

There’s no comparison between freshly harvested green beans in-season and off-season imported/hothouse green beans. But what about canned green beans that were harvested in season compared to “fresh” green beans purchased off-season? I’ve found that even after canning, the in-season beans are still tastier than off-season “fresh” beans at the store. This was a concern I had – I spent my childhood eating bland green beans my grandparents canned from their garden. That made me wary of canning green beans, until I realized my family avoided salt religiously back in the 80’s. Take it from me, home canned green beans with salt are delicious and flavorful.

So canning green beans IS worth it?

Yes. It’s cheaper*, the time investment is honestly pretty minimal and they taste great. It’s also comforting to have a stockpile of food that we would normally eat. Covid-19 has certainly driven home how fragile the supply chain can be.

There are a few drawbacks, though. It’s necessary to have or buy a pressure canner and jars – that can be a big investment upfront. One way to get around this is to see if you can borrow someone’s canner for the weekend. That way you can do your beans all at once and see if you enjoy the process enough to purchase your own canner.

It’s also necessary to have somewhere to store the canner and to store all those lovely quarts of food. Canning the beans does limit future preparation somewhat – once you’ve canned beans, it’s pretty much impossible to saute or roast them.

If I didn’t already have a pressure canner, putting up beans probably wouldn’t make sense for me at this point. But since I had one, spending some cash up front for six month’s worth of beans and taking a few hours to prepare and preserve them was a great option. Eventually, I hope to have enough space to grow most or all of my beans for canning, which will reduce the cost even further.

I’ll update this post in the spring to reflect how long our bean supply lasted and how we felt about eating canned beans over the course of the winter.

All in all, I’m really pleased with the process, I’m happy to have put up so much food and I’d definitely do it again.

I’m updating this post to add a link to two new articles. How Much Space Do you Need to Store Food? and What Supplies do you Need to Store Food? both have a lot of useful information to help you further evaluate canning and food preservation. In addition to all of the concerns about time and money I’ve covered here, it’s also worth considering if you have what you’ll need to store your canned food and other bulk food items.

Please leave a comment and let me know if you’ve decided to give canning a try or if you think I’m off the mark on my conclusion!