At the end of Week 0, the chicks had arrived safely, including TWO extra chicks! They were all tiny (of course) but healthy and active. The chicks ate and drank with very little prompting and spent a lot of time exploring their brooder. Taking care of baby chicks their first week was pretty easy and very enjoyable.

Chicken care guides suggest handling new chicks as little as possible since the stress of travelling through US mail is enough upheavel for one day! Once they have settled in, it is good to gently stroke them and handle them so they get used to being touched. Since I know I’ll need to handle my chickens to move them, care for them or just play with them, I want them used to contact from the start.

On their second day, I began very gently stroking their backs and cupping my hand around them in the brooder. I also started letting them peck a few grains of starter crumble from my hand.  By Day 3, I felt comfortable lifting them out of the brooder and holding them for a few minutes. This was not just a fun chance to cuddle the babies – I also needed to check their backsides for Pasty Butt.

Pasty Butt occurs when manure gets stuck on the chicks bottom and starts to block their vent. Blockage prevents waste from escaping and can kill chicks very quickly. One chick had a bit of manure stuck to it’s bum, so I used a warm, wet towel to loosen the manure and clean it off. At the end of Week 1, that’s been the only brush with Pasty Butt, but I check them regularly. 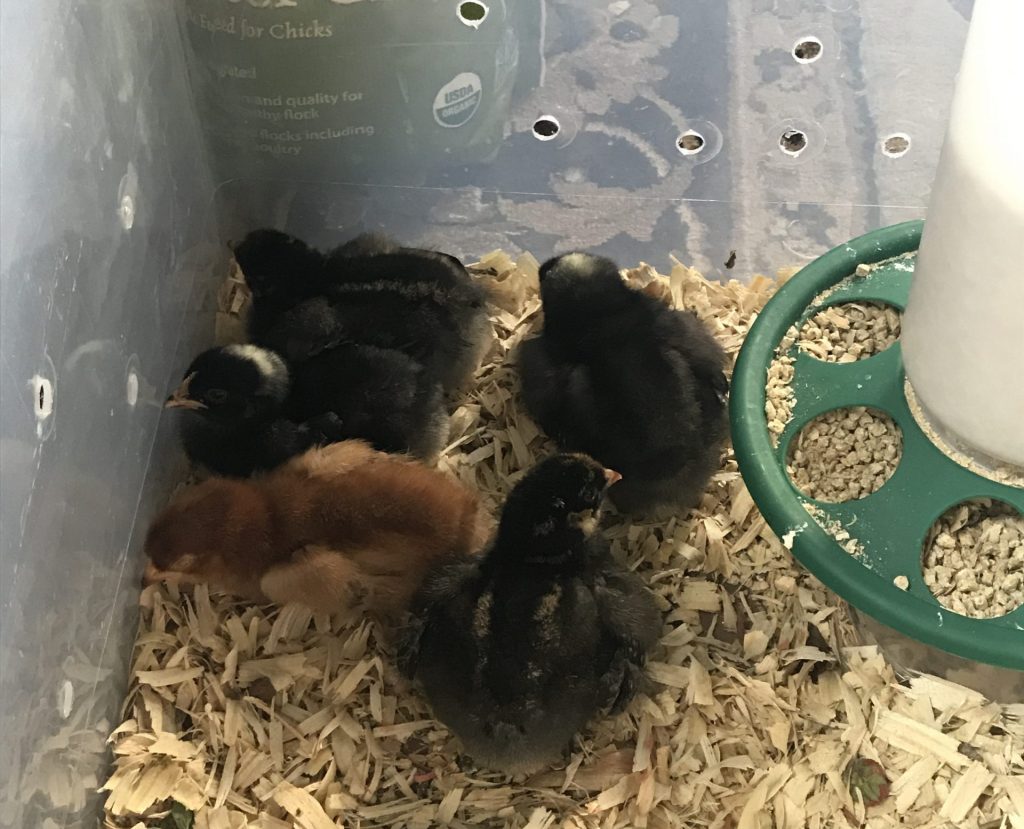 How Much Food and Water Do Chicks Use the First Week?

I’ve now been taking care of the baby chicks for a week! They seem to have doubled in size and they’ve gotten quite strong. The chicks can already jump and flap to the edge of the brooder! It’s fascinating how quickly they are developing. I’ve been holding them on my lap for a few minutes twice a day. I also gently stroke or touch them in the brooder. It’s hard to say if they enjoy any of that but they don’t seem upset by it.

On Day 4, I offered them strawberries from the garden, and the berries absolutely terrified them! After a few minutes, the Rhode Island Red pecked one experimentally, and then ran away. I tried a piece of apple the next day and they were slightly more receptive, but did not really eat much. They did devour a handful of sunflower seeds.

I’ve  kept plenty of food and water in the brooder but stopped trying to keep the feeder and waterer full. They need to be cleaned often, so I was throwing food and water  out in the process. The only issue I’ve had this week was with the chicks kicking bedding around and filling the water tray. After a couple rounds of that, I put the waterer on an empty plastic container to raise it up about an inch and that solved the problem. I did the same with their feeder.

How Big Are the Chicks Now?

By Day 5, the chicks could jump out of the brooder, so it has to stay covered with a screen at all times now. I added a small wooden log to give them something to climb on and interact with and they seem to really enjoy having something to climb onto. I’ve taken it out and cleaned the manure off a few times. They chicks are all noticeably larger, especially their legs. They seemed to elongate through the neck and legs first, and then their bodies began to fill out.

As Week 1 wraps up, they’ve gone through about 2 cups of starter crumbles  and I’ve had to change the bedding out a couple of times. I expect to use quite a bit more food and bedding as they eat more and produce more manure. 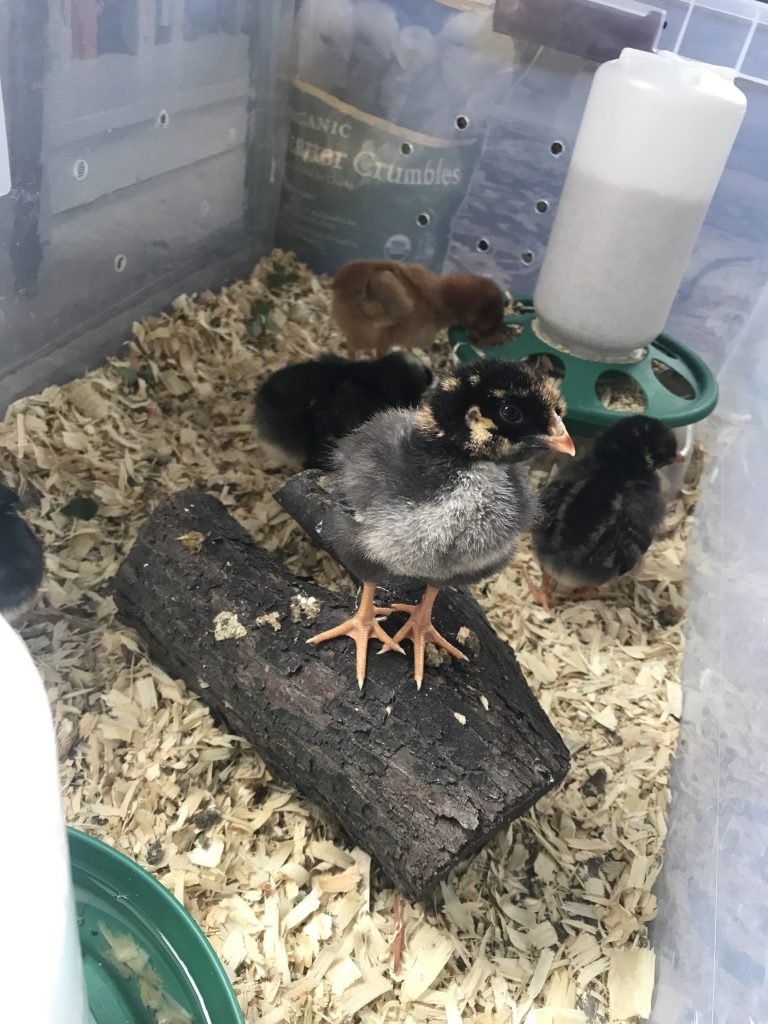 IMPORTANT TAKEAWAYS FROM THE FIRST WEEK:

Other Notes on Taking Care of Baby Chicks:

Always wash your hands any time you touch the chicks or anything in the brooder. It’s possible to pick up salmonella from handling chickens.

See you next Friday for a recap of Week 2! If you’re just joining,  What to Egg-pect When You’re Egg-pecting post discusses how and where I ordered the chicks and what supplies I purchased and recommend. It’s probably the only Egg pun I’ll make.