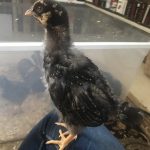 At the end of Week 1, the chicks had all gotten leggy and started growing baby feathers.  They were eating, drink, pooping and able to jump to the edge of the brooder. During week 2, this all continued (of course), but the chicks started showing a marked impatience to get out of the brooder. They began to be real escape artist, taking any chance to make a break for it. That’s what I would call the theme of Week 2 – Escape from the Brooder.

At the end of Week 2, the chicks are almost three full weeks old (their hatch day was on a Wednesday, so their age doesn’t perfectly align with my weekly updates).

The three week old chicks are huge! At least it feels that way. Their legs got quite long and thickened up and their necks elongated. A few days later,they started putting on body mass, and now each of them takes two hands to hold. They *feel* like actual chickens now, instead of like little puffs. They’re about 8-9 inches tall from feet to head.

They have grown so rapidly, and with the increase in size came increase in strength. Even the smallest chick can flap and fly a few feet and all of them can get about three feet off the ground. Their wingspan has increased significantly, too. Their wings were also the first area to grow feathers, and now most of their little bodies are feathered. The Rhode Island Red and the two Wynadottes both have cute little clumps of tail feathers but the two Barred Rocks have only just started getting tail feathers. All five chicks still have fuzz on their breasts and heads, and all five have just started to grow their combs.

Fascinatingly, as small as their feathers are, they already have breed markings.

How Do Cats Behave with Baby Chickens?

I have three indoor cats, so I was very concerned that one of the chicks might run for it and get hurt. Instead, the cats helped herd the chicks on one occasion when the baby was too fast for me.

I wouldn’t let the chicks roam around unchaperoned with the cats, because the cats are still creatures of instinct. But I have been very pleasantly surprised by how gentle and interested the cats have been. Normally, all three cats  watch outside birds through the window, tails twitching. They even make little chirps and trills at them, and definitely see them as something to prey on. Not so with the chicks. The cats like to lay by the brooder and watch them, but their ears stay soft, their tails don’t twitch and they don’t show any of the usual “attack” behavior.

As mentioned, I’m only willing to trust their kind behavior so far, but it’s been quite sweet to watch the cats sit and keep the babies company. One chick fussed a fair amount when I had to take her out of the brooder and her little distressed cries brought one of the cats running. I swear, she seemed concerned about the chick and even mewed back to it as though trying to calm it.

Bottom line, I wouldn’t leave the brooder open where the cats could have access to the chicks but I haven’t had to protect the chicks from the cats and the cats have not attempted to get into the brooder or to “get” the chicks. They will approach for a very gentle sniff if we’re holding one of the chicks, and then they retreat, with their curiosity seemingly satisfied. I was expecting much more aggressive behavior from our cats, so this is a nice surprise. 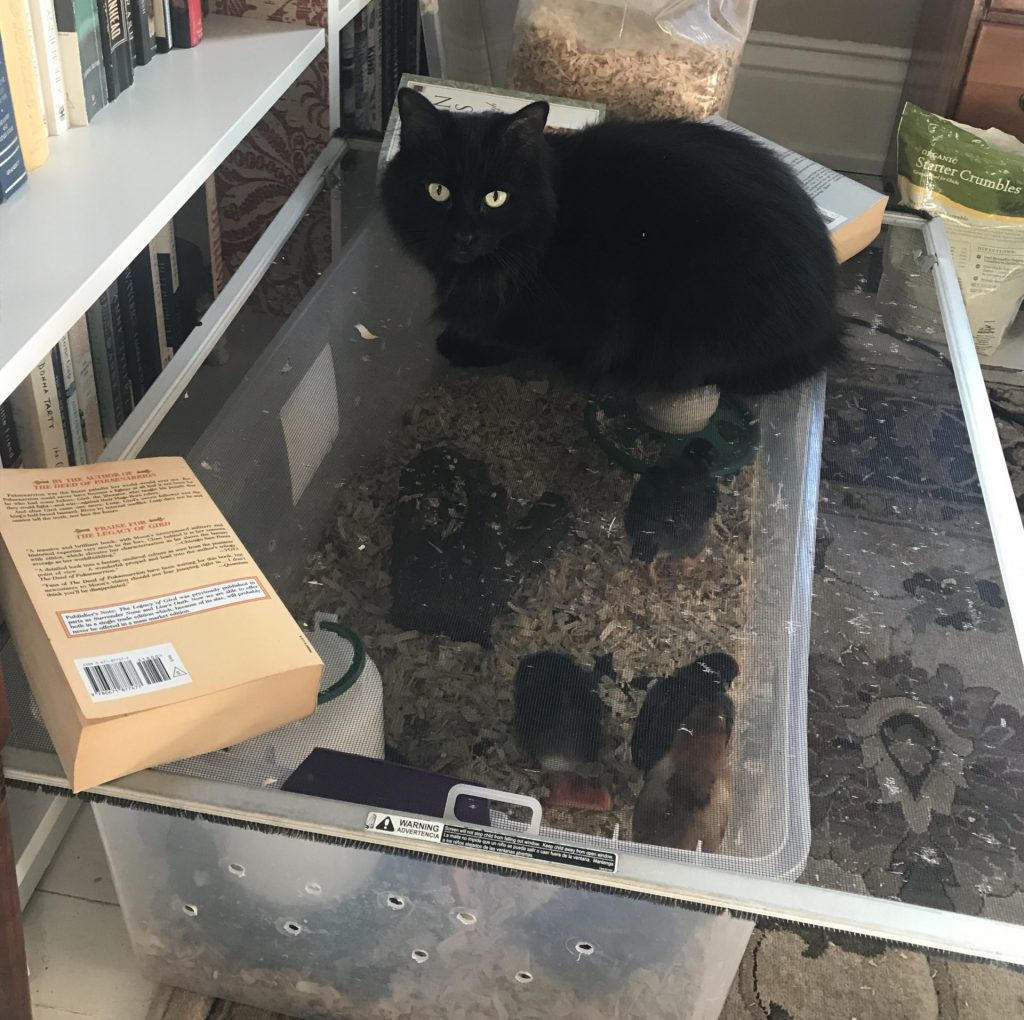 How Much Food and Water Do Young Chicks Need?

By the end of Week 2 (so two full weeks of caring for the babies), the five chicks had eaten about 2.5 pounds of Starter Crumbles in total. As expected, they ate quite a bit more during their second week. Water consumption was about the same, but I had to fill the waterer less often since I figured out how to raise it up and reduce the amount of bedding the chicks kick into it.

I had to change their bedding completely twice during Week 2. Five chicks in a small bin mean it gets soiled quickly. Despite that, I’ve only needed about 1/8 of the huge pack of pine shavings so far. I put the dirty shavings into our outdoor compost pile, and highly recommend that as a way to get some use out of the messy bedding.

Chickens have a pecking order in their flock, and they start establishing that order from the beginning. Our little flock has been pretty calm, but in the past week, one of the Wynadottes and the Rhode Island Red definitely seem to be vying for top spot. All of the chicks will scramble to try and get a bug or a strawberry from the other birds, but those two are usually the ringleaders.

The chicks do seem attached to each other. When we take one out of the brooder, the others gather and keep an eye on it. It seems like the chicks recognize us and seem happy to see us. They don’t love being held but most of them are happy to perch on our hands, arms or shoulder. The Rhode Island Red is the least interested in being petted or perching but she still seems friendly towards us. The Wynadottes are the friendliest of the flock.

All the chicks are very active and dash about. They make a range of sounds, including little contented murmurs. They’ve started trying to take dust baths in their brooder shavings, a behavior that will increase as they get older. 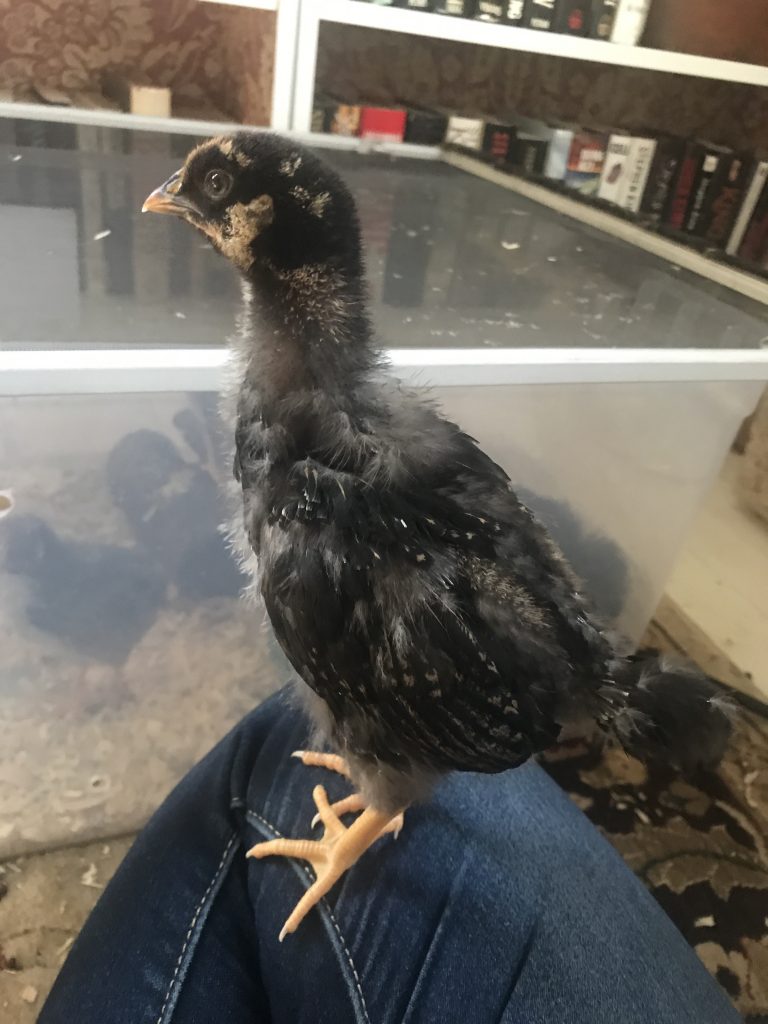 I don’t have many photos from Week Two because the chicks became escape artists who did not want to sit still!