At the end of Week 2, my flock of chicks were going on three weeks old and had become daredevil escape artists. Things have happened quickly over the past two weeks, so I’ve combined Week 3 and Week 4 into one entry, since it’s all a bit of a blur.

They’ve had a huge growth spurt! In the past two weeks, they’ve gotten several inches taller and have put on a lot of mass. They’re easily 10-11 inches tall now and are thickly filled out through their body. It’s no trouble at all for them to jump and flap three or four feet into the air and they move really fast.

Most of their first round of feathers have come in so for the first time, we can tell the pairs of Wyandottes and Barred Rocks apart. Their legs have gotten quite stocky and their necks have grown long – it’s fascinating to watch them grow. 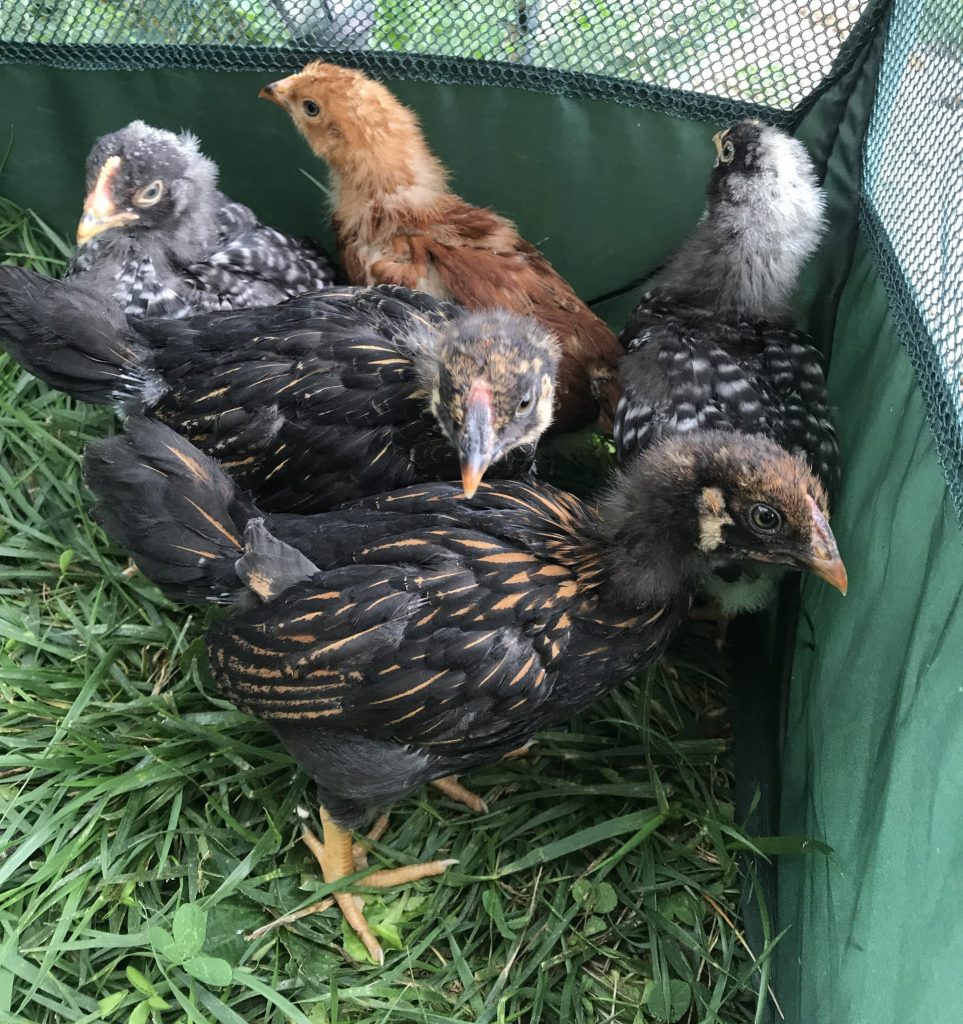 How much food and water do four week old chicks need?

Over the past two weeks, the flock has grown quickly and they’ve been eating much more. Their feeder holds just under two cups of starter feed and I’m refilling it every day, though it never gets completely empty. I would estimate the five of them are actually eating about 1.5 cups of food each day. They also eat some bugs and grass now.

That’s the biggest change! As the chicks hit age 3 weeks, we started taking them outside during the days. It’s August right now, with day time temperatures in the mid to high 80s. Our coop and run weren’t done yet, so I bought this pop-up chicken run and they love it. They have lots of room to run around but they’re still safe and contained. I started them out in it just an hour or two at a time and let them gradually get used to being outdoors. Later on, when I want to have them turn over a section of the garden, I can put them in the pop-up run and keep them in one area, safe and sound. 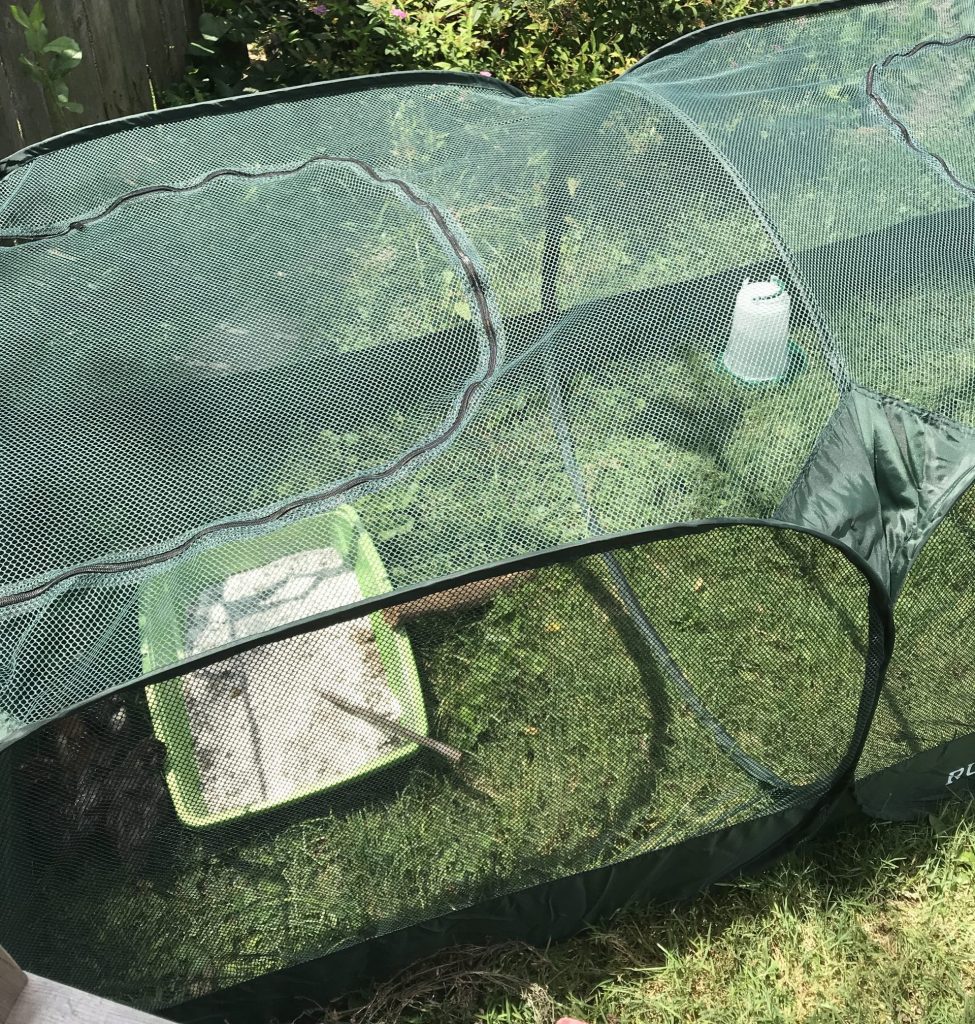 It’s been great moving them outside relatively early. They have much  more room to run around and the brooder isn’t overrun constantly. Keeping the bedding clean and the waterer free from debris was becoming a serious challenge. If the weather were cold, I would move them to a larger brooder and keep them inside, but the summer weather means they can safely be outside.

Just a few nights ago, right about their 4 week birthday, we got their coop finished and they started spending the night in it. It was a little scary to leave them out there the first night but it was warm and the coop is very sturdy. The whole flock was quite happy when I went out in the morning to put them into their pop up run. We expect to finish their permanent run over the next few days and then they’ll be able to enter and exit the coop into the run any time they want, except during the night. 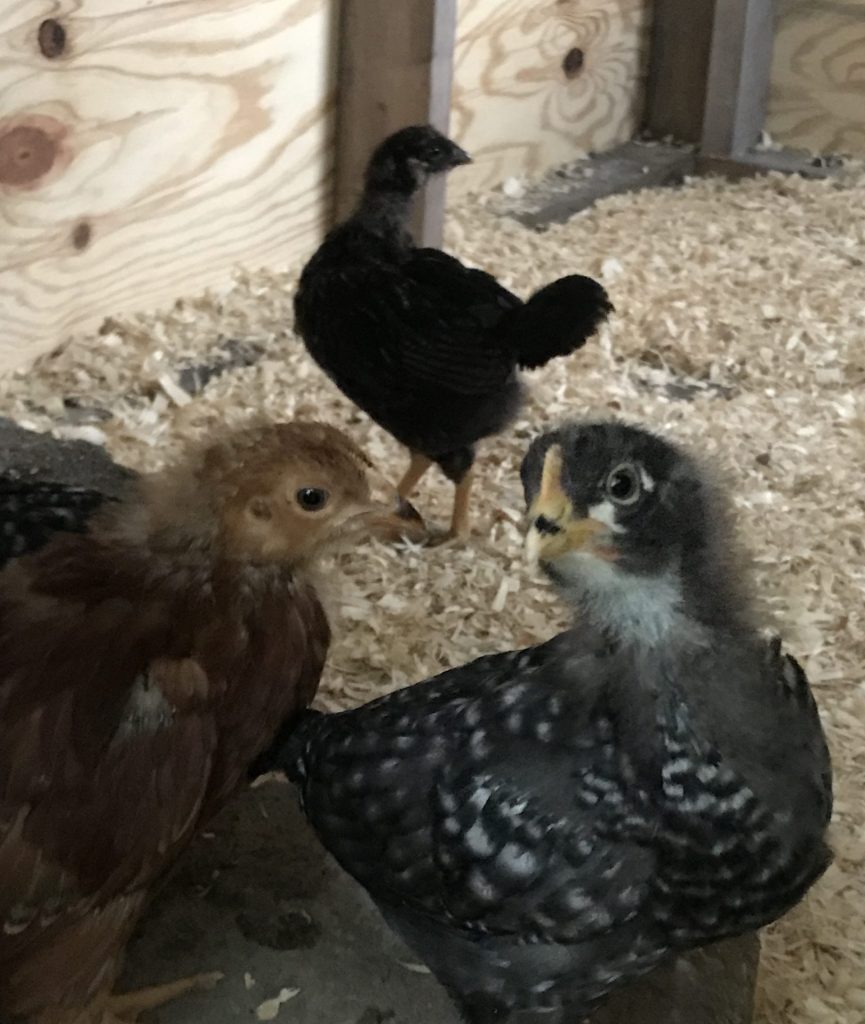 This is the most interesting part! The chicks are really showing individual personality and behaviors now. One Wyandotte and one Barred Rock seem to be vying for dominance but the Wyandotte definitely seems to be winning. She’s the first one to do anything new and is very eager to get out of the coop or brooder. She and the Barred Rock are also the two friendliest. Both will sit on our laps or shoulders and both come running when my husband or I visit. The other three chicks are interested and friendly, but tend to hang back.

All five chicks enjoy gentle pets and like to peck treats from our hands. Of the five, the other Wyandotte is definitely the shyest and hangs back the most. It’s going to be fascinating to see how their personalities continue to emerge over the coming weeks. .

They all enjoy dust bathing now, which is delightful to watch and helpful in keeping parasites away. Whenever a bug gets into the run, they all go running after it and sometimes yank it away from each other. The chicks have also started resting on a large log perch, though they do still nap on the ground in a pile, too.

→ What Do You Need to Can Food?

→ Is Canning Food Worth It?