What to do with fresh rosemary? 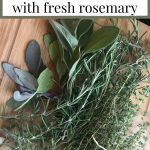 Rosemary is one of the most common and popular herbs around. When someone says “herb”, rosemary is probably one of the first to spring to mind. It has a distinct appearance and a heavenly, unmistakable flavor. Having rosemary in your garden is just as nice as having it in your kitchen. It’s a striking plant and adds a ton of visual interest to any garden.

Some background on rosemary

Rosemary is a Mediterranean plant and it thrives in hot, sunny weather. Because of its origins, rosemary is common in many Mediterranean cuisines and is one of the key components of Herbs de Provence. It has long been a symbol of remembrance.

Disclosure: I’m an affiliate for amazon.com, Azure Standard and other companies. Clicking on links in my articles and purchasing products may result in the seller offering me compensation. I only share products I use and enjoy. Affiliate relationships help me cover the cost of producing content for Hey Big Splendor without intrusive ads.

HOW DO YOU GROW ROSEMARY?

In many places, rosemary is what’s known as a tender perennial. That means that although rosemary is a shrub that continues growing year after year, it cannot do so in cold climates. If you live in USDA zone 7 and below, rosemary will almost certainly not survive outdoors in the winter. Bummer, you say? Yes….unless you grow one of the cold hardy varieties!

Yes, it’s true! There are several varieties that have been bred to tolerate far colder temperatures than the plant originally evolved in. Tuscan Blue, Madeline Hill and Arp are three such varieties. So if you live in the cooler part of the US, seek out those types if you want to grow your rosemary in the ground. Otherwise, you’ll need to either keep your rosemary in a pot and bring it indoors for winter or treat it as an annual and replant a new plant each spring.

What you should know about growing rosemary as a perennial

A key difference between rosemary and many other herbs, which lose some or all of their foliage in winter, is that rosemary is a shrub. That means it has a woody structure which persists all year long. Even in the dead of winter, cold hardy rosemary will still be there, holding fast even under a blanket of snow. It generally keeps it’s green needles, though they can become drabber in color and lose much of their tenderness and flavor. In the right conditions, rosemary can become quite large but it is pretty easy to keep controlled with pruning if you wish. Unlike many other woody perennials, rosemary will regrow even if you prune it down to the wood. In fact, doing so is helpful in keeping the shrub compact and keeping new, tender growth coming.

Once rosemary is established, which simply means is past the initial shock of being transplanted and has started to grow new roots and foliage, it needs very little care. As noted, pruning can help keep it tidy but it’s not actually necessary for the plant’s health. Rosemary doesn’t need much water but it does prefer a soil that drains well. It will, however, grow in even heavy clay without too much fuss. Don’t fertilize it – the plant doesn’t need it and too much extra fertilizer can dampen the aroma and flavor.

In the spring, rosemary will produce blue or white flowers. These are some of the earliest blooms, so expect to see them covered with bees. Many herbs will change their flavor once they’re flowered, but rosemary is fairly unchanged by producing flowers. Nevertheless, it’s a good idea to deadhead your plants after a few days of feeding the pollinators, to ensure optimal flavor. Bonus, the flowers smell and taste wonderful. I like to harvest mine and use them to make a very light finishing salt.

USING IT IN THE KITCHEN

Rosemary is one of the most popular herbs to cook with. It has a distinct, slightly piney flavor that works wonderfully with most meats, poultry and vegetables, especially potatoes. The flavor melds beautifully with other herbs like thyme, tarragon, oregano and sage and it pairs perfectly with lemon and orange.

Rosemary Roasted Root Vegetables is a delicious way to use rosemary.

It’s easy to use rosemary in recipes or dishes. You can strip the needles off and use them or throw the entire spring into a dish, though you should remove and discard the stem after cooking. The needles can be a little tough, and they can become brittle in some preparations, especially dry roasting. Mincing them finely can help offset the toughness.

Here are a few great ways to cook with fresh rosemary:

To harness the full flavor of rosemary without the tough needles, try infusing oil with rosemary. Make herb butter to rub on chicken before roasting or to garnish cooked steak or lamb. Rosemary salt is a fantastic way to season food during cooking or just before serving.

This is by no means an exhaustive list! Many recipes call for fresh rosemary, making it one of the most useful herbs to have on hand at all times.

According to master herbalist Rosemary Gladstar in her book Medicinal Herbs, rosemary the herb is very effective at improving memory and concentration. It can also help relieve headaches and has mild anti-inflammatory properties. Two great ways to use rosemary for its medical benefits are making rosemary and lemon balm tea and including it in a tincture.

Fill the jar with hot but not boiling water.

Steep for at least 20 minutes before drinking. Steeping the tea longer will produce a stronger and more flavorful tea. You can enjoy the tea hot or over ice. 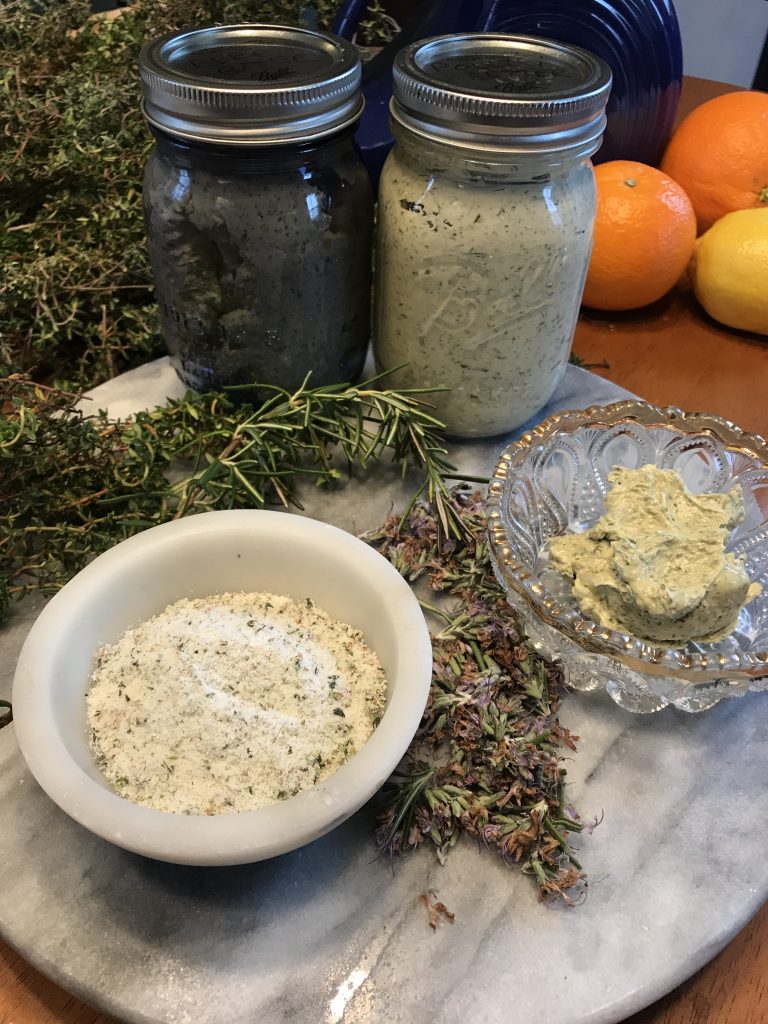 HOW TO PRESERVE IT

Drying herbs concentrates their flavor but also dulls it. Having said that, rosemary is more successful as a dried herb than it’s leafy compatriots like mint or basil. Rosemary is easy to dry – start with freshly cut springs and lay them on a tray or screen. Once the needles are brittle, strip them from the stems and store in an airtight jar.

OTHER WAYS TO USE FRESH ROSEMARY

Mince rosemary needles and include them with a salt scrub or foot soak. The aroma is energizing and very pleasant. Rosemary and mint are an iconic combination in bath and spa products, so feel free to add a couple drops of peppermint oil to the salt or mix in some fresh mint leaves.